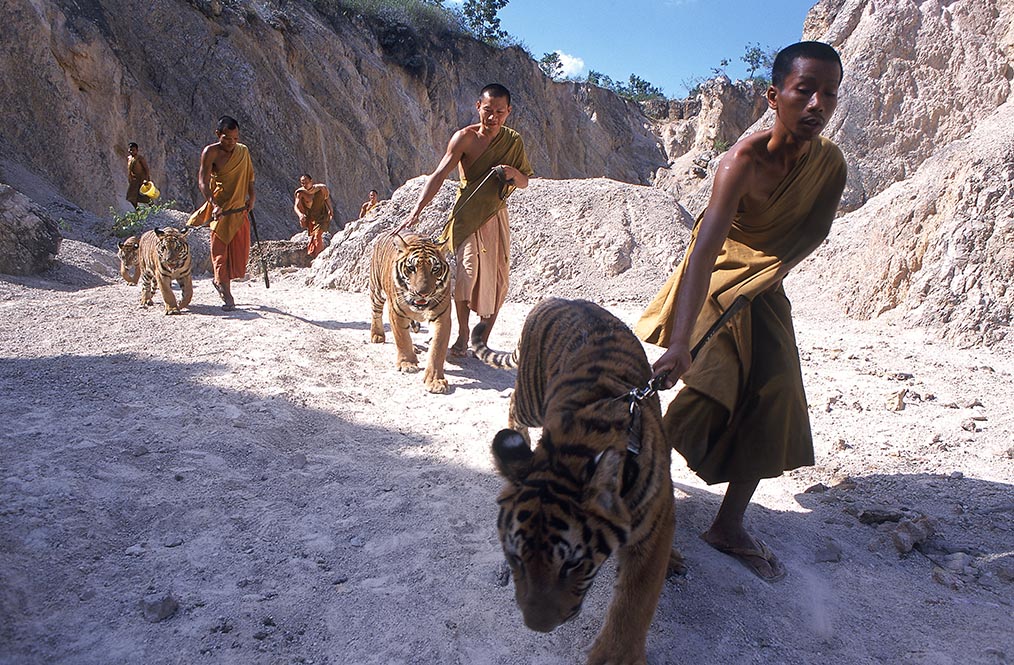 When I covered the Tiger Temple at Kanchanaburi, Thailand, it was little known. Me and the journalist could only find one related small article on the place in The Bangkok Post. We pitched the story as a picture led feature to The South China Morning Post and got the green light. On arriving at the temple we were impressed at the amount of space it offered the tigers, who apparently were given a free run of the place every evening. We were met by a couple of young novice monks who took us to see the abbot. No fees were involved then, no lines of tourist waiting in the wings.

The abbot told us a long story on how his temple acquired their first three tigers cubs. It went something like this- ” A group of hunters had killed the parents of the cubs ( the tigers bits and pieces were to be sold to the Chinese black market, and made into medicine products ). The hunters took the cubs to a taxidermist, who then went about his job, injecting them with formaldehyde. The hunters then had a sudden fit of regret and halted the process rescuing the cubs from being stuffed. Now this story didn’t ring true with either me or the journalist, it raised far to many questions than answers but the abbot wouldn’t elaborate further.

We was now left with some great pictures, really monks walking tigers, me being allowed to lay with the tigers, ten surrounding me. So close I could smell their breath, great stuff. Remember this was before the place was known. But what to do the copy (text). What we eventually did was scale down the abbots account and concentrate on the tigers, we quoted him but in a way that could be read as neutral. Good writing on the part of the journalist and it meant we still had a story to the newspaper. It was a lifestyle piece so any investigative journalism could be done later.

My lasting image of the place was when the tigers noticed some grazing buffalo, they took off after the animals, scattering them in panic. It was like something out of a wildlife documentary programme, only that running after the tigers were some frantic monks.

The temple is now, of course, a huge tourist attraction. I feel there are still some unanswered questions about the place but what the answers to the questions are, I still don’t know.

Improve your photography dramatically and get to see Asia and it's people too.